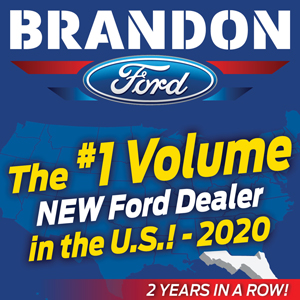 CBC congratulates Brandon Ford in Tampa on their 2nd year in a row as the #1 volume new Ford dealer in the United States!

Going from #183 to #1 may seem impossible, but as Brandon Ford has proven, with the right team and the right marketing it most definitely IS possible!

When Brandon Ford hired CBC Automotive Marketing in 2001, they were the #4 Ford dealer in Tampa, and #183 in the U.S. They were struggling with CSI scores and with holding gross in a very competitive market.

Brandon Ford made 2 important changes. They shored up their internal operations, and they hired CBC Automotive Marketing. CBC began auditing  their marketing plan and installed in-store Media Habits Research, which has continued to be utilized daily ever since. We then decided to begin brand-building on the radio with a value message and pricing philosophy. Ads featured General Manager Wayne Hammond in unconventional-dialogue spots that promoted superior customer service combined with fantastic deals, without ever giving specific pricing. Within one year, Brandon Ford became the #1 volume Ford dealer in Tampa (in a landslide). Within 3 years, they were the #1 volume Ford dealer in Florida (a position they’ve never relinquished since).

CBC’s media plan with Brandon Ford has evolved over the years, and now includes an effective mix of digital and traditional marketing, based on custom research and supported by strong, customized video, audio and graphical creative, to keep Brandon Ford in front of potential customers with a compelling message wherever they consume media. Whether it’s traditional or Internet radio, TV/cable, OTT, social media marketing, paid search, e-mail marketing or point of sale…a potential customer sees and hears spirally-integrated Brandon Ford messaging wherever they are in the buying funnel.

In the 20 years CBC and Brandon Ford have worked together, they have never had a month that has seen red ink (not even during 2008-09), their CSI ranking completely turned around and their sales volume and grosses have consistently been through the roof. To this day, Brandon Ford is one of the most profitable Ford dealers in the country.

The Team at CBC is proud to be a small part of Brandon Ford’s large success!

Whether you sell 30 or 3,000 cars a month, CBC can help take you to the next level. Let’s have a conversation!